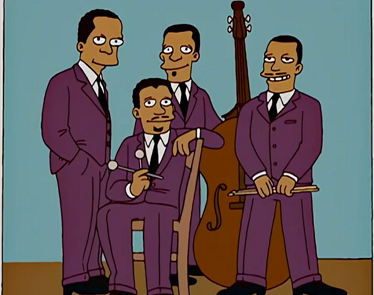 "Jazz superstar" group playing a benefit concert to raise money for injured jazz drummer Bart Simpson in the "Jazzy and the Pussycats" episode of animated Fox sitcom The Simpsons. Bart, encouraged to play drums to channel his anger, excels, getting recruited by real local jazzbos Defonzo "Skinny" Palmer and Marcus "Marbles" Le Marquez before getting sidelined after getting bitten on the wrist by a tiger.

The coincidentally have the same name as a large insurance company.