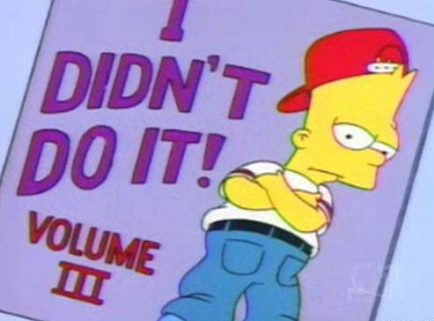 Ten-year-old hellio.n and scion of the Simpson family in the long, long, long, long running animated Fox sitcom The Simpsons. Bart has had several episodes of musical prominence:

Bart also cut a novelty song (a parody of MC Hammer's "Can't Touch This," apparently produced by MC Hammer himself) when he was briefly popular as the "I didn't do it boy" when he appeared on The Krusty the Klown Show. That's the "Bart Gets Famous" episode (February 3, 1994). There's a quick shot of his album I Didn't Do It! Volume III, so he released at least three albums then.

The "Bart to the Future" episode (3/19/2000) is set in a future where Lisa Simpson is president of the U.S., and Bart is a ne'er do well with the cover bar band Captain Bart and the Tequila Mockingbirds.

In the "Jazzy and the Pussycats" episode (September 17, 2006), Bart is encouraged to play drums to channel his anger and keep him out of mischief. He excels and plays with his sister Lisa's group, and then is recruited by real local jazzbos Defonzo "Skinny" Palmer and Marcus "Marbles" Le Marquez to play with them.

A lot of other fake jazz musicians get quickly mentioned at a benefit concert introduction: