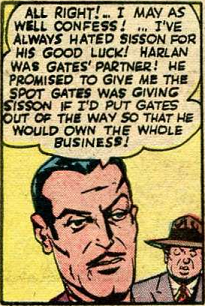 Lake is jealous Swing Sisson and his band have just signed a contract with breakfast king Danville Gates, who's going to sponsor them on a radio program. Gates's partner Harlan promised Lake the contract if he offed Gates to have the whole business to himself.

Swing and pal Toby Tucker quickly get to the truth, and Lake confesses so calmly to everything when caught, you have to wonder if he even has adrenal glands.