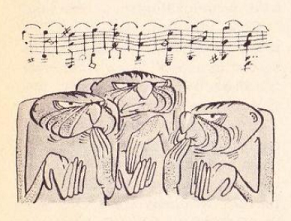 Alien instrument from the planet Wellington V invented by one of it's native composers, Treth Schmaltar. From the humor article "Extracts from the Galactick Almanack: Music Around the Universe," by Larry M. Harris (pseudonym of Laurence M. Janifer) and published in the June 1959 issue of Galaxy. It was illustrated by MAD magazine's own Don Martin.

The instrument was featured in Schmaltar's Symphonic Storm Suite and Hum-Drum Sonata.