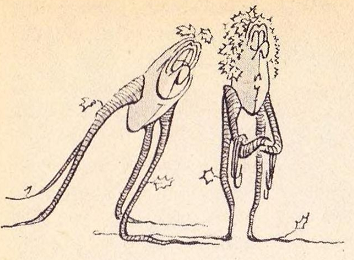 Alien science teacher turned orchestra conductor, from the humor article "Extracts from the Galactick Almanack: Music Around the Universe," by Larry M. Harris (pseudonym of Laurence M. Janifer) and published in the June 1959 issue of Galaxy. It was illustrated by MAD magazine's own Don Martin.

A native of the planet Lavoris II, he attempted to impress a musician he loved, Silla, by creating a Student Orchestra. Although it had a successful debut playing Beethoven's Ninth Symphony and Fenk's Reversed Ode, it had the opposite of it's intended effect. Silla took the love of another, stating, "You are not a musician, but a scientist. Any musician would have refrained from growing his orchestra from seeds."