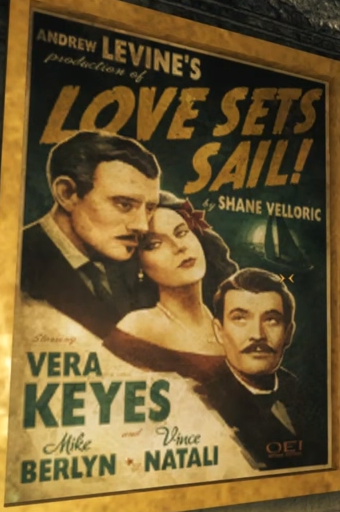 Actress/singer from the pre-War era in the Fallout series of computer games universe.

Slowly revealed through the course of the game is that she owes her career to singer Dean Domino, who plucked her from obscurity and groomed her. Then he introduced her to wealthy businessman Frederick Sinclair, blackmailing her with her "chem use, indiscretions" to get Sinclair to fall in love with her. Then Domino would use his access via Keyes to rob Sinclair's Sierra Madre casino. Her drug use turns out to be because she is suffering a painful terminal illness.

A poster for her film, Love Sets Sail hangs in the resort.

Keyes, Dean Domino, and Joey Baxter were to perform at the Tampico Theater in the Sierra Madre resort for it's gala opening event, but that turned out to be the day World War III started, ending civilization.

"Vera Keyes" is revealed to only be her stage name, but her real name is never given.