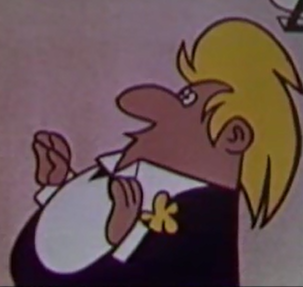 European orchestra conductor in the 1949 comedy album The Adventures of Gossamer Wump. Hudnut is very impressed with Gossamer Wump's triangle playing, and hires him for his symphony orchestra.

Unfortuantely, Wump forgets his belt on opening night, and spends the concert alternating between playing the triangle and pulling up his pants, putting the audience in hysterics. Embarrassed, Wump leaves the orchestra.

The image is from a 1960 animated version of the cartoon which used the original recording for the audio.