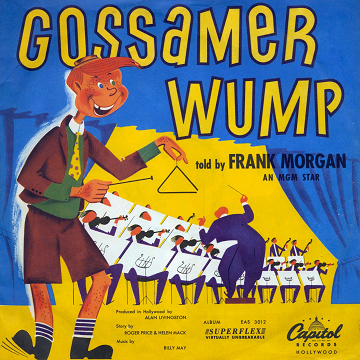 Aspiring triangle player with heterochromia iridum and hero of the 1949 comedy album The Adventures of Gossamer Wump. After ten years in music school, he gets his first job with Gaylord Gout, but gets himself fired.

He then gets a gig with Stanislav Hudnut's symphony orchestra, but flubs it. Redemption comes in the form of frozen milk, as he becomes the guy who plays the triangle on top of an ice cream truck.

The original audio was edited and used to make a 1960 animated short version of the story by Mel-O-Toons, only they inexplicably changed the name to Gosomer Wump.