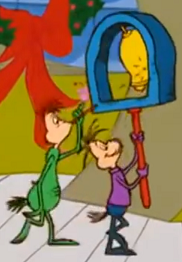 Idiophone native to the Whos of Whoville, from the 1966 Dr. Seuss animated television special How the Grinch Stole Christmas!

It's just a simple bell mounted on a pole and frame. However it not only has an ordinary clapper, but a second musician simultaneously uses a pea-shooter on the bell's exterior to produce harmonics and microtones, because that sounds like I know what I'm talking about.