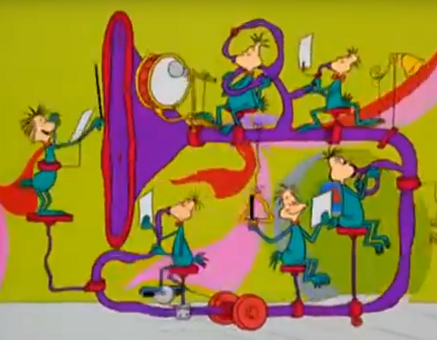 We can only assume that the pedaling Who has thigh muscles like steel cables. If he sat on your shoulders, he could probably snap your neck like a twig.

Poorly named multiple-person musical instrument native to the Whos of Whoville, from the 1966 Dr. Seuss animated television special How the Grinch Stole Christmas!

This massive, valveless brass instrument is part vehicle. Pedal-propelled by one only of the players, we hypothesize that it is steered tiller-style by the rearmost player by swiveling his seat, which is attached to the small rear wheel. Except that player is facing rearwards, not forwards, making it nigh impossible for them to see where they are going. Attached to the monstrous contraption are a foot-pedal operated bass drum, a foot-operated bell, and let's face it, a triangle player who is nothing but dead weight.

Despite the "electro" in the name, there appears to be nothing electrical or electronic about the instrument. Nor is the prefix "cardio" (relating to the heart), appropriate, except for the pedaling Who, who is getting a ton of cardio, moving the weight of the instrument AND six Whos combined. Further, the Grinch says the preceding rhyming word oddly:

And then they'll make

on their great big

Instead of pronouncing "deluxe" with the ususal short u vowel sound (/ʌ/), he pronounces it with a long oo or ew sound (/juː/), "deloox." This renders what was probably supposed to be "flux" into "floox."