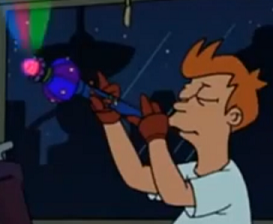 Cryogenically frozen human protagonist who wakes up in the year 3000, in the animated sci-fi television series Futurama

In "The Devil's Hands Are Idle Playthings" episode (first aired 10 Aug. 2003), the last episode of the show's original run on Fox, Fry becomes a holophonor star. His talent (previously displayed in the "Parasites Lost" episode (first aired January 21, 2001) returns thanks to a deal with the Robot Devil to swap hands with him. His new robot hands give him the dexterity to express the music in his soul, even on beginner pieces like "The Grumpy Snail." Soon, he's selling his two-record set, Fry's Greatest Holophonor Hits, on TV and everything.

Hedonismbot then commissions him to write an entire opera. Leela: Orphan of the Stars looks like a hit, until the Robot Devil interferes at intermission to get his hands back.

In a season six episode, "The Duh-Vinci Code" (first aired 15 July 2010), Fry performs an "armpit concerto" to warm up the crowd before Leonardo Da Vinci reveals his greatest invention, the machina magnifica.

In the "The Luck of the Fryrish" episode (March 11, 2001), Fry discovers his nephew was a member of successful rock band Leaf Seven.