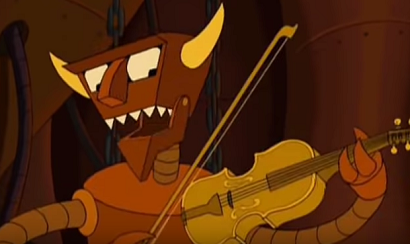 Also known as the Robot Devil, this entity is the ruler of Robot Hell in the year 3000. Literal-minded religious robots built an actual, physical, functioning robot hell to punish sinning robots. Under New Jersey, of course.

In the "Hell is Other Robots" episode (May 16, 1999), Robot main character Bender is sent there after backsliding back into sin after a conversion to the Church of Robotology. His pals Fry and Leela rescue him by challenging the Robot Devil to a fiddle contest, under the terms of the Fairness in Hell Act of 2275. If they win, they get Bender back and a solid gold fiddle. If they lose, they only get a smaller, silver fiddle, and Fry will be killed by the Robot Devil.

Beezlebot plays a mean fiddle, but he's no match for Leela's ability to smash the gold fiddle over his head. Bender, Fry, and Leela make good their escape.

The characters have another musical tangle with Beelzebot in the "The Devil's Hands Are Idle Playthings" episode (August 10, 2003). Human Fry cuts a deal with the Robot Devil to swap hands with him so Fry can master the holophonor, a notoriously difficult musical/visual instrument. Fry becomes a big success, but the Robot Devil gets sick of Fry's gross human hands, and concocts a convoluted scheme to get his robot hands back from Fry, which ends up ending Fry's musical career.