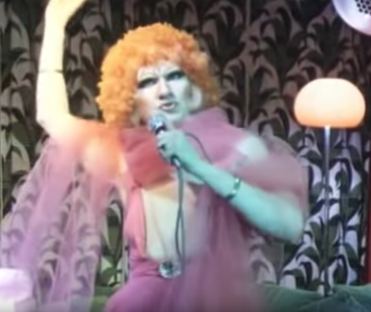 We’re told they've just sold "50 million copies" in Russia alone of their hit "Paranoia Paradise," which is heard in the film. The androgynous Lizard is murdered by Bod (Jenny Runacre), the leader of a violent street gang, when they break into her apartment.

"Were you involved in the filming of Jubilee and what did you think of the film"?

"Wayne had a co-starring role in Jubilee playing the part of Lounge Lizard, and Wayne and The Electric Chairs performed the song "Paranoia Paradise" in the movie, in a scene where Lounge Lizard is watching him / herself and the band on a T.V. set and singing along to the song, so it was a very brief appearance by the band.

Played by singer Wayne County, before she became Jayne County.