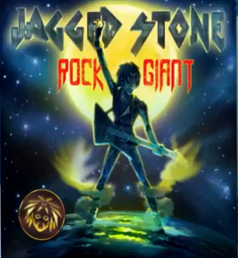 British rock star from the "Guitar Villain" episode (28 Feb. 2016) of animated television series Miraculous: Tales of Ladybug & Cat Noir. He's supposed to do a duet with DJ Mr. XY, but Mr. XY dissed him in an interview.

So Stone turns into unimaginatively named supervillain Guitar Villain and tries to kill Mr. XY on top of the Eiffel Tower. Heroes Ladybug and Cat Noir save Mr. XY and turn Guitar Villan back into Jagged Stone.

Once recovered, Moth's victims never recall their time as a supervillain. So Stone goes back to his regular life with no repercussions.

Ladybug, in her secret identity as Marinette, designs the cover of Stone's new album, Rock Giant.

Stone pops up briefly in the "Kung Food" episode as a celebrity chef show judge, and is mentioned and glimpsed in the "Captain Hardrock" episode.