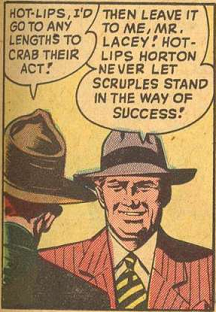 Bandleader of dubious morals at the Rhythm Club in New York City, and rival of bandleader Swing Sisson from the Swing Sisson story in Feature Comics #131 (February 1949). When Sisson hires pretty dancing girls to compete with the Rhythm Club, owner Lacey and Horton cook up a scheme to sabotage it. They put a padlock on the dressing room, and substitute their own ugly and overweight dancers. It backfires when the audience thinks it's a comedy act and loves it.

Horton says he and Sisson have been rivals for years.

Although it's not specified or shown, Horton's nickname clearly implies he plays a brass instrument, probably a trumpet.