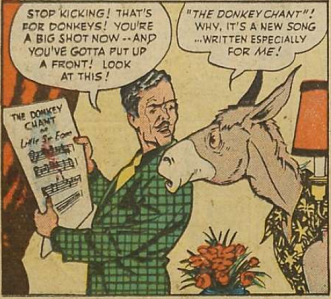 The singing donkey from "The Singing Donkey" story of comic book Captain Marvel Jr. #71 (March 1949). He's the singing donkey. Formerly an ordinary,fruit-cart-pulling, non-singing donkey, he always had a love of gentle music on the radio, especially his idol, Bop Dosbey. One day another donkey kicks him in the throat, ouch. When Equo finally heals, he discovers he can sing and talk! So does passing theatrical agent Will Slizzum. Slizzum debuts him on WHIZ-TV, generating tons of publicity.

When oversized crowds jam his first performance, superhero Captain Marvel Jr. helps out. He sticks around in time to prevent Equo from killing Slizzum when Slizzum reveals he's signed Equo to a lifetime contract Equo can't get out of since donkeys don't have any legal rights. Uh, if they don't, then that contract's also not binding, doofus.

Captain Marvel Jr. comes up with a scheme to help Equo. At his next performance, Equo starts to bray like a regular donkey, and Slizzum tears up the contract, frustrated. Equo was just faking, tho, but goes back home to his fruit-seller owner, having had enough of show business.