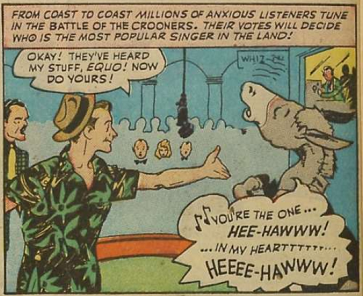 Equo's manager has Equo compete in a televised Battle of the Crooners against Dosbey, but Equo reverts to braying, losing the contest. But Equo threw the contest to get out of his contract.

His big hit is "You're the One In My Heart."

Dosbey's name and appearance are a parody of real singer Bing Crosby.