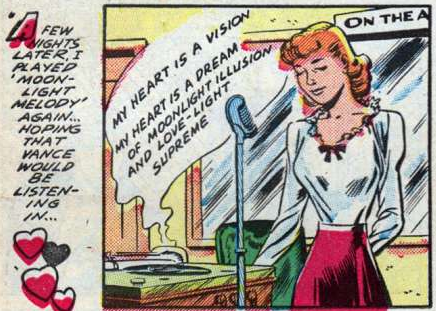 The only female DJ at an unnamed radio station in downtown New York City from the "Heartache Serenade" story of romance comic book Intimate Love #6 (March 1950).

She worked her way up from receptionist to DJ over three years. She meets Vance Powers, a man who won't stop requesting the prewar oldie "Moonlight Melody" by singer Jane Melden. When it turns out he's a not a creep, she dates him, falls in love, and gets engaged. But when she overhears two of his friends talking about Vance's relationship with Melden. Loman thinks Vance only loves her because he's on the rebound, and storms out to seek Melden.

Melden sets her straight: she never had a relationship with Vance; she married Vance's brother Richard, who then died in the WWII. "Moonlight Melody" makes them both think of their lost Richard.