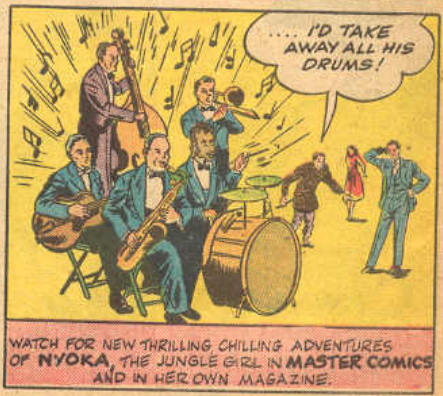 Rich dumb jitterbug who hires Nyoka the Jungle Girl to be his African guide so he can find a genuine Voodoo drummer for the swing band he wants to start. His dad, Barnstable Smoot, thinks a trip to Africa might make a man out of him, and talks Nyoka into it. But Smoot the younger owes $100 grand in gambling debts to mobster King High, who gets Zoot to sign an insurance policy. King High and a goon try to off Zoot repeatedly during the trip. Then there's some dated racist claptrap about cannibal natives, despite the Fawcett comics proudly boasted editorial board featuring two educators and an aviator.

At the end, portrait of white privilege Zoot Smoot simply kidnaps a native to be the drummer of his unnamed band and gets away with it.

From the "Voodoo Drums of Death" story of Fawcett comic book Nyoka the Jungle Girl #2 (Winter 1945).