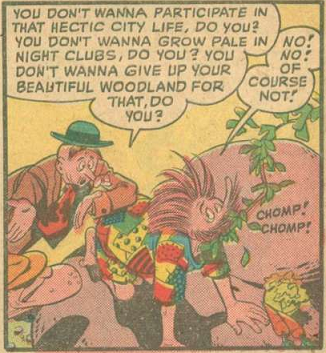 Radio announcer Dave Clark goes to sign him up to play his hit tune "Woodland Boy" on radio station XYZ (changed later in the series to WXBC. But crooks Song Thief Danny and Plugger have gotten to him first. They try to get W.B. to sign his song over to them, but hero Midnight (Dave Clark) beats them up instead. Later at the station, Woodland Boy starts acting way out of character, eating steak, and caring about money. Turns out Song Thief Danny hired a gal to woo W. B. away, and disguised himself as W.B. and replaced him. Midnight discovers the truth in time, and rescues the real Woodland Boy.

Woodland Boy is a parody of real-life composer eden ahbez, whose song "Nature Boy" was a huge hit for Nat King Cole in 1948.