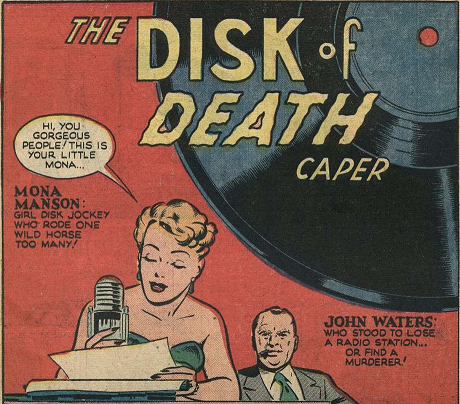 Radio station from "The Disk of Death Caper" story of comic book Sam Hill Private Eye #7 (1951). Ha ha, DDT is a pesticide so dangerous they took it off the market.

WDDT DJ Mona Manson wakes up private detective Sam Hill in the middle of the night, because someone is going to kill her. Hill gives her the bum's rush, but the next morning he finds her corpse stuffed in his trunk. He spends half the story trying to stash her corpse so he can find the real killer.

But then he hears her on the station- they are playing transcription discs of her show for the next month while she's on vacation. Hill gets his long-suffering secretary Roxy to imitate Manson and put on a live show to smoke out the killer.

It works, and one of Manson's jilted ex-boyfriends comes to the station and tries to shoot Roxy, but Hill shoots him instead.

Hill could have saved her if he had just listened to her in the first place. Way to go, jackass.