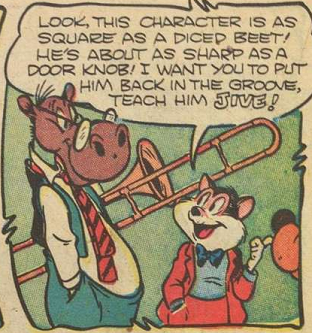 Equine swing bandleader and trombonist introduced in the "Ignorance is Bliss" story of comic book Hi-Jinx #3 (November 1947). In a later story, "Corn off the Cob" in Hi-Jinx #5 (March-April 1948), it's revealed he plays trombone and lives in Jive Junction, where the story is set. His nickname, according to hepcat Tommy, is "the Arm."

He plays so hot, he has to wear asbestos gloves and dunk his trombone in a tub of cold water after playing.

His name is a parody of real swing bandleader and trombonist Tommy Dorsey.