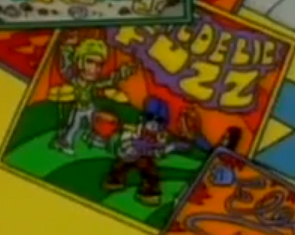 Phil Funnie's unsuccessful, yet critically acclaimed late 1960s band when he was young, before he was the father of the title character of the animated television series Doug. Turns out big-time band The Beets were fans and count the Fuzz as a big influence. First mentioned in the "Doug's Adventures On-Line" episode (June 5, 1999).

Phil was the drummer. They released one self-titled album and a 45 rpm single from it, "She Sat on My Zither at the Sit-In and Oh What a High Note She Hit."

The band's name is a play on real band The Psychedelic Furs.