The Pied Piper of Himmler 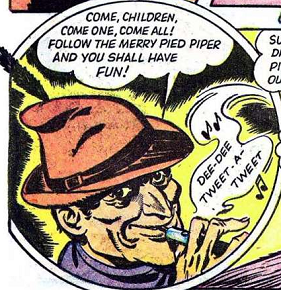 Do not listen to this man.

Nazi supervillain who can play a flute in a hypnotic manner forcing people to dance, almost even against their will. A nemesis of Captain Marvel Jr., he appeared in comic book Captain Marvel Jr. #2 (December 18, 1942) and #3 (January 20, 1943).

In the first story, he charms the children (adults are unaffected) of the city away to a mountain like his namesake, only here the mountain has a secret, hidden Nazi indoctrination camp. When Captain Marvel Jr. shows up, the Piper tries to kill him with "My death note! It destroys the brain!" Although it temporarily stuns the Capt., it doesn't kill him. And shouldn't it have destroyed the Pipers brain also? Maybe Nazis hate continuity. Cap thwarts the evil piper and his Nazi henchmen.

In the second story, the PP of H has escaped from prison, and is trying to sneak his way onto the air at radio station WHIZ, disguised as a genius flute player named Petroff Pfeiffer. He succeeds and plays his "death song" that is so sad it makes people commit suicide. He's interrupted by Captain Marvel Jr. but gets away. Then his new mission is to get back on the radio again and send a musical code hidden in a song titled "For the Glory of Old Glory" that will give Nazi spies at the Panama Canal the info they need to blow up U.S. ships and block the canal.