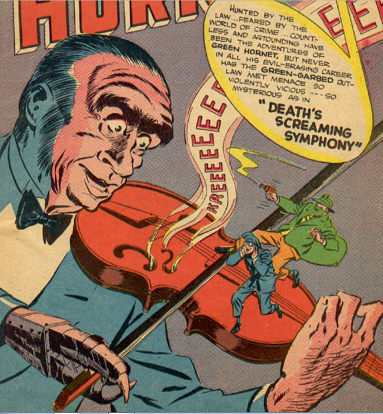 Splash pages are the best pages.

The Green Hornet discovers that The Note, whose real name is Dragora, "was once a promising musical student! He was brutally hazed at music school by three fellow students, Bartok, Paraguay, and another, Leopold Stravinsky! ... His left hand was crushed...amputated! Dragora must've waited all these years to revenge himself on those three."

The Note has discovered a way to set off explosive "nitro-pellets" with sound waves of the proper frequency, which he used to murder Bartok, and tried on the other two.

His left hand has been replaced by a scary claw, and he runs Dragora's Music Shop on Ruthven Street.