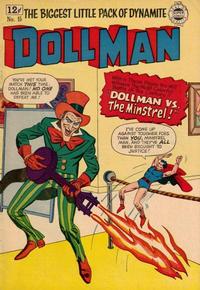 Nemesis of the Doll Man who kinda looks like The Joker in the comic book Doll Man #23 (July 1949). The story was also reprinted in 1963 in Doll Man #15. The reprint has the better cover, where he sports a flame-throwing banjo. He has other trick banjos, including ones that shoot sleeping gas, magnesium flares, and, you know, just plain bullets.

Thank God he's not in blackface.

In issue #138 of Feature Comics (September 1949), The Minstrel has dropped his cartoony zoot suit and giant chin and just looks like some schlubby older guy with a really bad hat. He has to lay low since the heat's on, but his ego is too big to resist messing with the three finalists of a modern minstrel contest, Harry Hurl, Texas Slim, and Eddie Hanor, the blackface singer... awww, dammit!