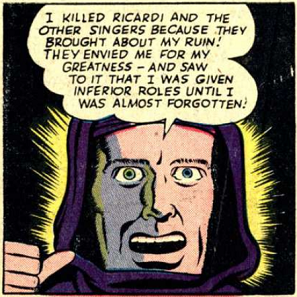 Opera singer turned murderer in the Destiny story of comic book Police Comics #27 (February 1944). What plot there is is swiped from the Phantom of the Opera. Tassi was a great tenor who disappeared about a year previously. His career slipped, and he blames the other opera singers, so he's sneaking onstage and murdering them. He murders singer Ricardi, his fourth murder. Hero Destiny chases him down and confronts him. A rooftop chase causes Tassi to slip and fall to his death.