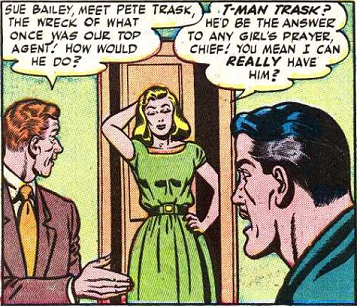 Anti-communist singer nicknamed the "Canary of Korea" from "The Boss Butcher of Luzon" story of comic book T-Man #10 (March 1953). She entertained the troops in the Korean War.

Her father was the U.S. consul in Manila, and she grew up and attended school in the Philippines. T-man Pete Trask escorts her to Balongo to sing for General Magsaysay's troops, but they are both ambushed and kidnapped by communist Huk insurgents led by General Igorro. Trask frees her.