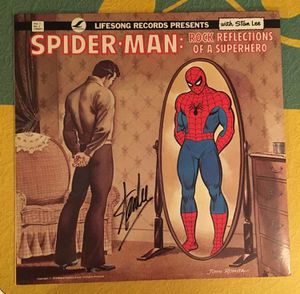 Yes, Spider-Man. But how, you ask.

Cause Spider-Man put out an album, Rock Reflections of a Superhero (1975), that's how. Not in the comic book, but for reals. Well, as real as a comic book character can have an actual album, that is. But it didn't stop the Archies or Josie and the Pussycats. But it's dang unusual for a previously nonsinging superhero to just up and put out an album. Maybe he needed a check. Maybe Stan Lee just wanted an excuse to hear his own voice more, as he narrates.

Oh but it gets better. On the back of the album are pictures of all the other superheroes as his back up band. Yep, there's a black superhero on bass. Dammit racism, knock that off! {{#ev:youtube|gALN-2_xi_Y}}

After a long period of artistic incubation/reboots/Clone Sagas Spider-Man put out another album in 2018. In the animated Spider-Man: Into the Spider-Verse film, part of Peter Parker's backstory is that he is famous enough to have his own cereal, comic books, and even a holiday album. Marvel made this in-movie gag real when it released a streaming mini-album of Spidey songs sung by their Into the Spider-Verse actors (Chris Pine, Jorma Taccone, Shameik Moore, and Jake Johnson). The album includes such holiday favorites as: