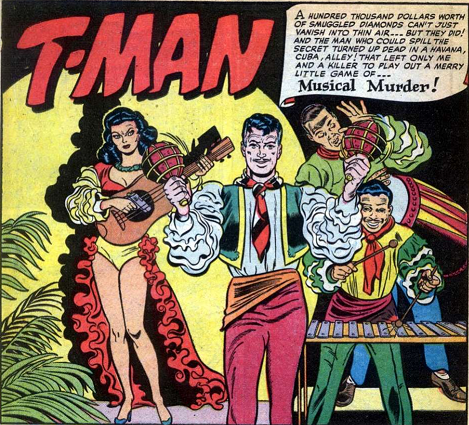 From the "Musical Murder" story of comic book T-Man #2 (November 1951). T-man Pete Trask is tailing diamond smuggler Anton Wolak in the most hilarious way possible. By constantly annoying, bothering, and needling him about how he's tailing him. Wolak hasn't done anything illegal... yet.

Wolak takes his legally bought diamonds from Amsterdam to Havana, where he gets chummy with this member of the Club Marco's mariachi band. Undercover agent Juan Garcia finds out Marita is the brains behind the outfit, and that they'll be traveling to New York on a gig, smuggling the diamonds with them. Over the phone, he's just about to tell Trask where they hid the diamonds, but gets murdered.

Trask tricks a confession out of Marita, and figures out that the diamonds were hid inside the maracas!

Marita is the only member of the band named.

A T-man is a a special agent of the U.S. Treasury Department.