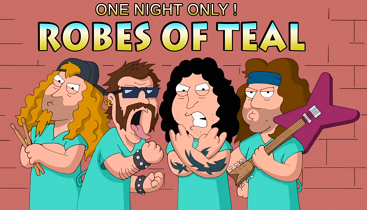 Peter Griffin and pals wake up in an abandoned hospital with amnesia. Peter then has an idea for them to form a band with this name (because they are all wearing teal hospital gowns). Then they immediately see a billboard for the band Robes of Teal, which ruins the idea of forming a band for Peter.

This is a double fake band, because the whole "having amnesia in an abandoned town" thing is really a virtual reality experiment forced on the quartet by Stewie.