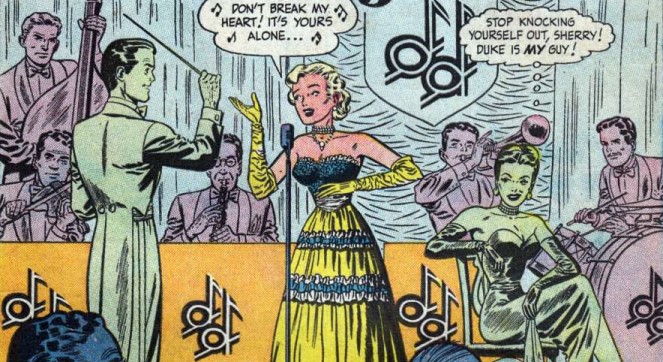 One night at the club, wealthy debutante Sherry Bowen is celebrating her birthday, and her friends get her onstage with to sing. She's so surprisingly good, Gaige hatches a scheme. Get Bowen to be the singer, use her connections to advance Dyler's career, and Gaige won't have to work and will just live off Dyler's new wealth as his wife.

Bowen's debut is a success, and the band's career rises. But Gaige is fed up with being sidelined and when Gaige realizes Dyler has REALLY fallen for Bowen. She spills the beans to Bowen to shut her down. Bowen breaks up with Dyler and quits the band.

Dyler also quits and disappears. Later, when Bowen tries to find Dyler, Gaige says "I don't know and I don't care where he is! He's washed up! I don't waste time on has-beens!"