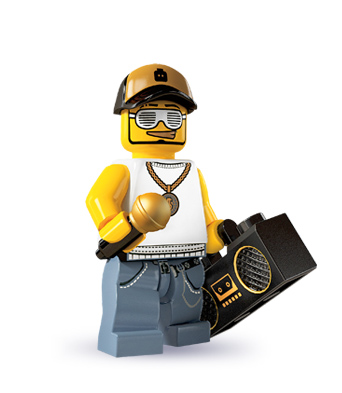 Wow. There are fake musician LEGO minifigs! They don't so much have names as occupations, but what can you do. Rapper is from Series 3, set 8803 LEGO Minifigures, released 2011.

From his online bio at LEGO.com:

The Rapper is a genius master of rhyming. He’s come up with rhymes for tricky words like “tugboat,” “larynx” and “zookeeper,” and he once even won a prize for finding a rhyme for “orange”. He may not be a huge music celebrity yet, but the Rapper won’t give up...