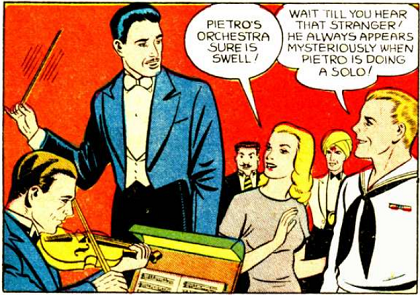 "The king of trumpet players" and bandleader at Max Beerfoam's Highball Club on Jive Street in the Mr. Mystic story of The Chicago Sun's April 9, 1944 comic book supplement. His real name is Sheldon Snide. He plays the swing that gets the bobbysoxers dancing. But a mysterious stranger has been showing up right when Pietro is about to do a solo, and plays his trumpet even better than Pietro. Mr. Mystic investigates and finds out the mysterious stranger is none other than Greek god Pan. He's traveling since "With Hitler and his Teutonic gods overrunning Greece, Olympus isn't fit place for man or beast or even a character like myself!" Pan just had to show up Pietro, since he's using his name.

Written and drawn by Fred Guardineer.