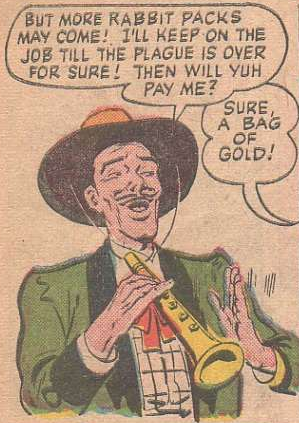 Hornswoggling swindler who's pulling a scam on local farmers and ranchers in "The Pied Piper of The West" story of old West comic book Ken Maynard Western #3 (April 1951). Hero Ken Maynard figures out what he's up to.

"Pete Piper" is likely not his real name. He's playing himself up as a Pied Piper of Hamelin type, who will play the music that will lure away the animals causing problems (rabbits, coyotes, wildcats). However, he and his gang trapped the animals and sicced them on the farmers and ranchers in the first place. Then they posion them and dump the bodies in the river to make it look like Piper lured there with his playing.