Painful Discharge and the Pap Tests 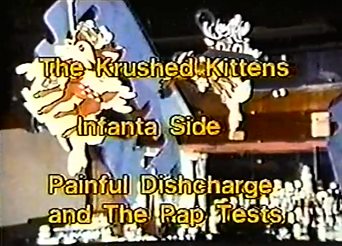 Punk band playing the Christmas Eve Battle of the punk bands at the Driftwood Inn's "newly redecorated punk-oriented Lobotomy Room, formerly the Crow's Nest." Mentioned in a SCTV episode (20 December 1983) commercial for the Driftwood Inn. They're competing with The Krushed Kittens and Infanta Side.

Yes, I know the screen cap says "Dishcharge," but the announcer says "discharge," and it makes more sense that the text is perhaps a comedically intended typo.

A later commercial mentions this event turned into a riot and the room burned.