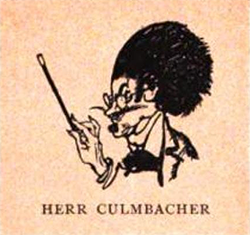 He conducts the generically named Metropolitan Symphony Orchestra in Ptior Kovik-Bordunov's "Gastronomic Symphony," his own "Larghetto," and the aria from the opera II Campanile, composed by Gondola, and sung by Félice Elefantine.

II. Larghetto. This etude is by the conductor. (He thought this would be a good place to work it in, the orchestra and audience being powerless to restrain him.)

Herr Otto Fedor Ivan Culmbacher was born of noble parents in Hofbrau, Silesia. He was discovered and imported to America by the brilliant patronesses of the Metropolitan Symphony Society.

A larghetto is a little largo — one without a handel. A composer writes a larghetto when he feels something like writing a largo but isn't, on the whole, quite up to it.