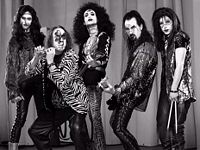 From the "Motherboy XXX" episode of acclaimed TV sitcom Arrested Development (first aired 14 March 2005). A five-piece "heavy metal band that used to rock pretty hard in the '70s," according to Arrested Development narrator Opie ...er, Richie...er, Ron Howard. A couple of briefly-shown photos of the band, who look like Kiss-meets-T.Rex-meets-Jethro Tull (the flute player has a shamrock painted on his face) appear in the episode. Lucille Bluth [Jessica Walter] (the mom) had taken George Michael [Michael Cera] (her grandson) to a mother-son event in called "Motherboy." Normally, she would have gone with Buster (Tony Hale), her youngest son, but since his hand was bitten off by a seal, she wasn't comfortable around him. Anyway, as Lucille and George Michael were checking in, they cut away to show the band and point out that they were legally obligated to make the distinction between the band and the event (likely a reference to the fact that hip-hop group Arrested Development sued the producers over the show's name).