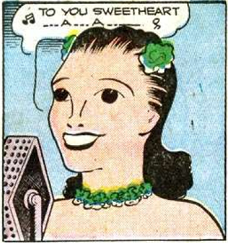 Her real name is Leota Sunny, and she used to be secretary for manufacturing plant owner Mr. Mason. She also took singing lessons. She witnessed him kill his partner and dump him in the swamp. Mason hit her on the head, and left her, thinking her dead. But she only had amnesia, and stumbled off. She ended up in Dick Tracy's car. He took her to Cafe Rhumba, where Tracy's old friend Rudy Seton is the orchestra leader. When he plays, she just steps up to the mic and starts singing. Seton is impressed, calling her a "natural." Tracy dubs her "Mary X." Seton gives her a job, new clothes, and puts her on his radio show, where they ask people who recognize her voice to contact the station.

After helping Tracy find the body of Mason's murdered partner Freez, a confrontation with Mason brings back her memory. Mason pulls a gun on Tracy and Mary, but is mysteriously shot. Turns out it was mobster Junky Doolb, who tried to frame Rudy Seton for the murder. Tracy arrests Seton as part of a plan to flush out the real killer. Doolb is set up by one of his own men, midget Jerome Trohs, and killed by the cops, as part of Trohs' plan to take over the gang.

After she gets her memory back, she keeps singing with Seton's orchestra under her real name.