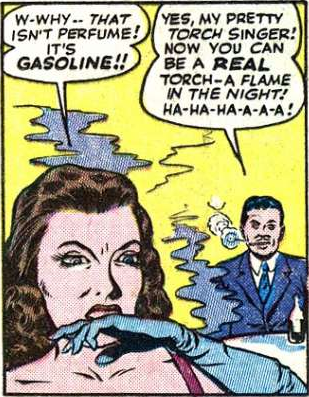 From the Sally O'Neil story of comic book National Comics #46 (February 1945). Policewoman Sally O'Neil goes undercover as this metafictional club singer to find out who's the arsonist burning down the town's nightclubs.

She auditions for the last big unburned nightclub in town, Frankie Sebar's C-Bar Rancho, and Sebar hires her.

It turns out disturbed perfume industry millionaire Mr. Jerome is a pyromaniac. After six unhappy marriages to nightclub singers, he's cracked. He takes the term "torch singer" too far. To get his "vengeance" he sits up front and spritzes them with a mix of perfume and gasoline, and lights them on fire with a cigarette. He's in cahoots with Sebar, who had owned all the other clubs, and had big insurance policies on them.

O'Neil avoids getting set on fire, and catches Jerome and Sebar red-handed.