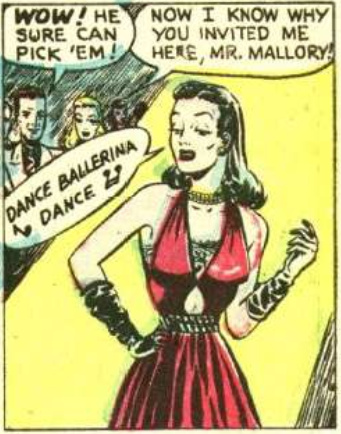 Singer from "The Case of the Jilted Canary" in comic book Zegra, Jungle Empress #3 (December 1948).

She's been hired by playwright Miles Kendall to sing at his big party. Also they were dating. But Kendall's taking his play to Hollywood to make a movie, and tells Maxine she's not going. She slaps him, he decks her, and bandleader Tommy Tiger jumps in, punching Kendall and taking his orchestra home. Then Maxine turns up strangled with Kendall over her body.

But he didn't do it. "Radio detective" and party guest Mike Mallory solves the case, getting Tiger to confess to the murder.

Mike Mallory has the weirdest radio show. He somehow solves crimes on the air, apparently by panicking law-breakers with inside information. At the beginning of the story, Mallory and his sponsor, Mr. Borman, are just pleased as punch that Mallory used his show to talk a man into suicide. Sure, the guy was a thief and a murderer, but dude! Eeesh, at least have the decency to not look so pleased about it.