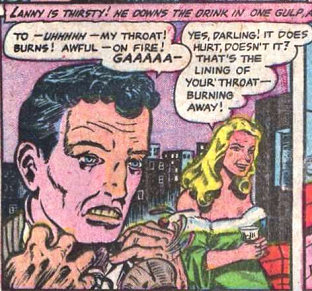 Popular singer from the "Here's to Horror!" story of comic book Journey into Fear #18 (March 1954). He gets chummy with millionaire Jane Marlowe to help his career, but he's already married. He keeps it a secret and begs his wife to do likewise. Soon he's in Variety and Billboard and has a million selling single thanks to Marlowe. Marlowe twists his arm into marrying her, and he does. To get rid of his bigamy problem, he kills his first wife by pushing her out a window. Later he cheats on Marlowe, and develops a spastic throat and can't sing. But Marlowe found out about his affairs and put acid in his drink so he'll never sing again. Burns goes nuts, and shoves her off the balcony while hallucinating about his first wife. He's sentenced to death for murder this time.