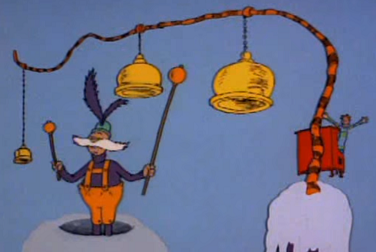 Musical instrument consisting of three bells hung from an elaborate frame from the Dr. Seuss cartoon Pontoffel Pock, Where Are You? aka Pontoffel Pock & His Magic Piano, an animated musical television special written by Dr. Seuss, and aired on ABC on May 2, 1980. They appear to be a traditional instrument of the land of Groogen. Groogen is a mountainous country inspired by the German Alps, with denizens in lederhosen and mustaches. Pock mentions the Klinkelspiel in his song about Groogen. Groogenians also play a valveless version of the flugelhorn.

The name is probably based on real instrument the glockenspiel. While the proper spelling is not given, German typically ends words with "el" instead of "le" as in English.