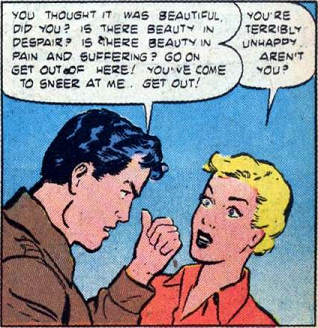 Troubled young violinist from the story "Mountain Song" of romance comic book Romantic Confessions vol. 1, no. 11 (Oct-Nov 1950). He was a promising young musician, but during the war, his plane was shot down over Antwerp, and his hands were burned, seemingly ending his career. Helen Wales stumbles upon his isolated cabin while horseback riding and hears him playing beautifully. She convinces him to come out of his shell, and they fall in love. She convinces him to come out of his isolation and begin his career again. After a setback, he's ready to quit. But then he gets a rousing pep talk from music critic Chester Black.

He sticks it out, marries Helen, and eventually solos at Philharmonic Hall, playing his own composition.