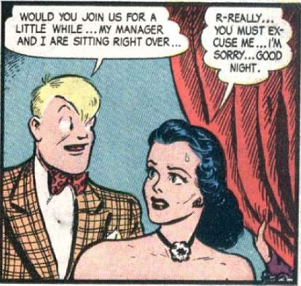 Nightclub singer with a mobster boyfriend in "The Case of the Nightclub Murder" story from comic book Joe Palooka Comics #29 (Feb 1949).

Heron Club owner and mobster boyfriend Marvin Bonessa slaps her around for talking to boxer Joe Palooka when they met on a train into New York City. Palooka's manager, Knobby Walsh, wants to help her career out and tries to see her. Bonessa schemes and frames Knobby for the murder of Lungy, one of Bonessa's stooges that Bonessa suspects of stealing from him.

Suspicious Bonessa breaks up with her and beats her up after she is unexpectedly interviewed by the cops. She finally provides the evidence for the cops to put Bonessa and his goons away for a long time.