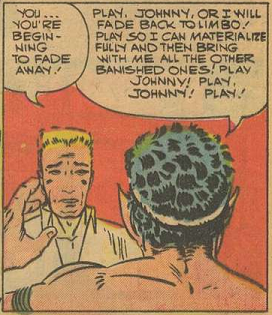 Talented jazz trumpeter from the "Little Boy Blue" story of Charlton comic book Tales of the Mysterious Traveler #10 (November 1958). He starts in New Orleans dives and moves up to tour the country and has fan clubs springing up. He only cares about the music, struggling and determined to play "...other notes, other sounds...music that nobody has played before!" One night on a tour stop in Memphis, in his hotel room, he finally plays those notes... and summons the Greek god Pan back to earth from his banishment in Limbo!

Pan tries to get him to play again to finalize his materialization and those of his pals. Freaked out, Johnny refuses to play ever again, spurns his trumpet, and runs off. When, months later, he's a broken bum and finally does try to play again, he's lost his "lip" and can't play the "other notes" anymore.