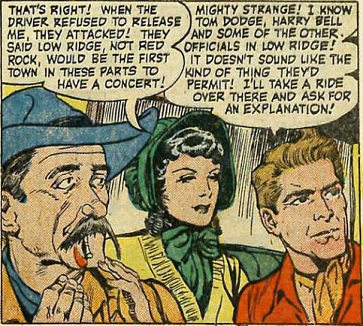 Opera singer "from an Eastern opera company" lured out to the wild West town of Red Rock by the town's leading citizens, desperate to add some culture. From "The Singer and the Six-Guns" story of Western comic book Bob Colt #2 (January 1951).

Her stagecoach is attacked coming into town, but cowboy hero Bob Colt drives them off. The nearby town of Low Ridge wants her to perform there next, but she turns them down, citing commitments back East. When she leaves after her concert, Colt hurries to catch her stagecoach and return a forgotten piece of luggage. But the stagecoach is wrecked, the driver dead, and Miss Green missing. Colt finds her in Low Ridge, preparing for a concert there after all. He figures out the outlaws kidnapped her and forced her to perform so everyone in town would be at the concert, and the outlaws could rob everyone unmolested. Colt waits for them and beats them up.