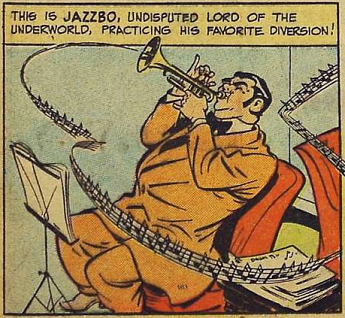 This eccentric crime boss loves to relax by playing his trumpet in the "Crime's Trumpeter" story of Fawcett comic book Captain Marvel Jr. #75 (July 1949). When his gang and office are busted up by Captain Marvel Junior, he takes it on the lam, and stumbles on a supernatural horn in a junk shop. Supposedly the horn Joshua used to blow down the walls of Jericho, and it will "...do your bidding only three times!"

Jazzbo uses it the first time unknowningly, by playing a song so sad that Capt. Marvel Jr. becomes overwhelmed with sadness and can't apprehend Jazzbo.

After Jazzbo figures out the horn's magic is real, he next plays it at a gig with Les B. Bopp and His Famous Orchestra at a Charity Carnival to make the wealthy clientele laugh so much they don't mind being robbed by him. Escaping from that theft with Capt. Marvel Jr. on his tail, he uses the horn the third time and the magical lightning bolt changes the superhero back into crippled Freddy Freeman. Fortunately, Jazzbo just thinks he transformed Capt. Marvel Jr. and doesn't realize that's his secret identity. Jazzbo ties up Freeman, and takes him to condemned theater and tries to use the horn a fourth time to kill him. But the fourth time collapses the theater making Freeman a free man, and killing Jazzbo.

The name of the theater? Why, the Jericho Theatre, of course.