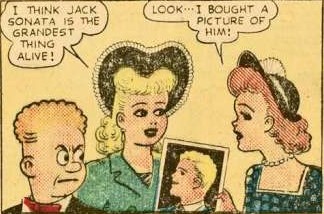 Handsome new radio singer that has all the gals in a tizzy in a Fritzi Ritz Sunday comic strip, the one that her niece Nancy eventually took over. Fritzi's boyfriend Phil Fumble is is sick of hearing about Sonata, already.

Not sure of the original newspaper publication date, but it was reprinted in comic book form in Comics on Parade #64 (February 1949) and Fritzi Ritz # 14, (Jan.-Feb. 1951). It probably first appeared in the 1940s when Sinatra first became famous.

His name is a play on real singer Frank Sinatra.