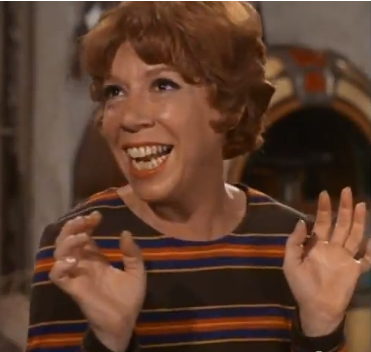 From the "Find the Monkees" episode (01/23/1967) of The Monkees. The long suffering secretary (played by Bobo Lewis) for eccentric TV producer Hubbell Benson (Carl Ballantine), who has put invitations out to all the local bands, except, it would seem, The Monkees. When Benson finally tracks down the Monkees to sign them as the stars of his new show, he asks the adequate Miss Chomsky to sing the theme song he's written. Suddenly entranced, Benson wants HER to be the star, leaving the other disappointed bands to mope back to the "extras" window to pick up their paltry checks.

See also The Four Martians, The Foreign Agents, and The Jolly Green Giants.